All of our interesting tidbits, accomplishments and upcoming events will be posted here 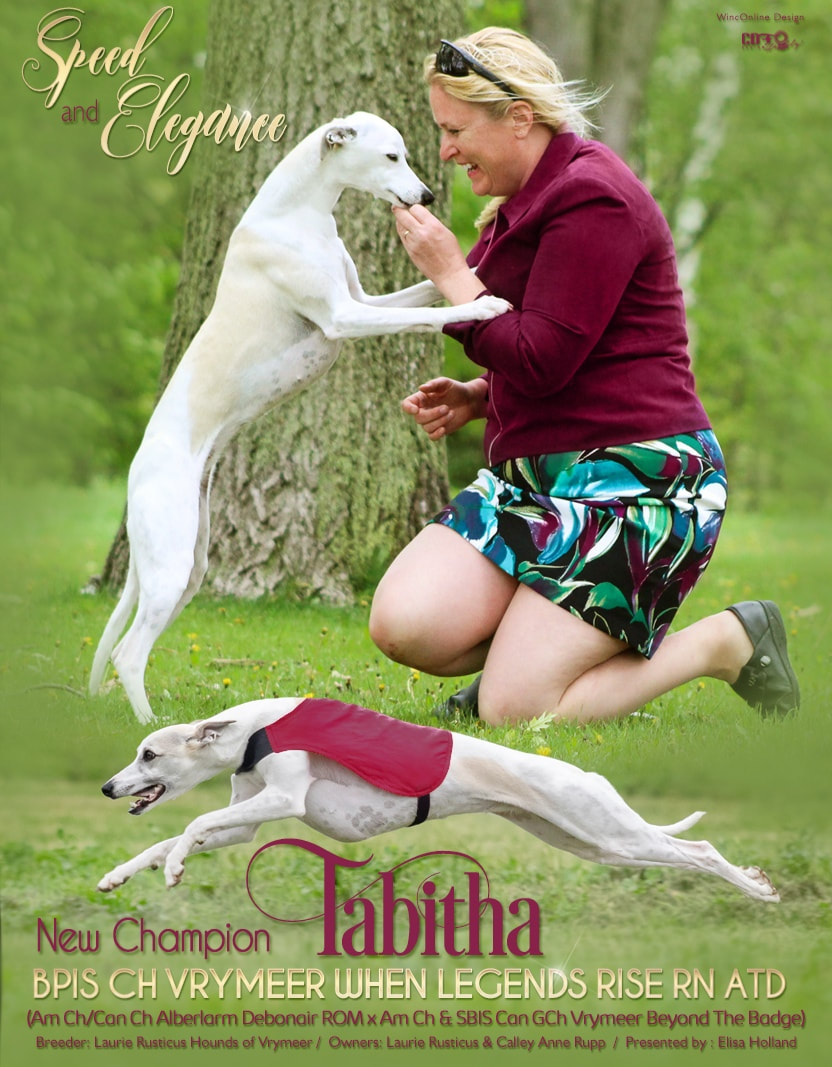 A new ad and a new website page for Tabitha, our upcoming Star

Karen and Joy earn Joy's CDX with a high in class

This year saw the start of the COVID-19 pandemic and as a result the world has changed for the foreseeable future. At the writing of this update late July, most Canadian dog events have been cancelled or seriously impacted. Due to limits on the size of social gatherings our picnic is on hold for the time being. In the meantime, we have produced some exceptional puppies towards a fifth generation of our breeding programme, happily expanding our families with our versatile, entertaining whippets.
As of October there have been less than a handful of Covid protocol shows.

Tabitha is a new Canadian champion earning her last point at the first covid dog show handled by Elisa Holland, winning Best of Breed, and now has half her points towards her Canadian Grand Championship title.

Elisa has trained and titled Tabitha with an AKC Rally Novice, as well as Novice, Intermediate and Advanced Trick dog titles

In March, Tabitha places in the BBE class three of four shows and gets a lovely RWB to the major at the supported entry at the AWC Celtic Classic Cluster in conjunction with the Eastern Specialty-- then we hightailed it home before the borders closed.

This July, our very special stud dog OTTO (Ch Vrymeer Deepwater Phoenix) at seven years of age has been collected and frozen


​
Karen and Joy earn Joy's CDX obedience title with a high in class. Joy currently ranks as the #3 hound in obedience in Canada.

Lucinda and Stuart win her third Best In Show Owner Handled, finishing the year in the top ten and qualified for the National Owner Handler Series finals in Orlando

Oksana wins another UKC Best in Show with Elisa

Fergus is close to his Grand Championship

Tabitha wins Best of Breed over specials, a hound group placement, best puppy in the group and a beautiful Best Puppy in Show at London Canine Association

​Judith and Tiramisu earn an AKC "AX" title in agility

Karen and Joy earned Joy's RAE title with her average score being 99. Joy is #1 in breed and #10 all breed in rally obedience as of mid April.
​
Lucinda wins Select Bitch at the American Whippet Club Eastern Specialty and OHBOB

We are thrilled with Lucinda's Best in Show OH in October in Maryland, a fantastic year for Stuart and Lucinda
​
Fergus is awarded Select under breeder judge Joan Goldstein at the Great Lakes Whippet club specialty

Oksana wins an Award of Merit at the Whippet Club of Eastern Canada specialty and wins both of the Lure Coursing classes at WCEC and the National specialties. She won a second placement by only 5 points earlier at the National field trial

Lucinda is a new American champion, winning Best of Breed over specials owner handled by Stuart. She now has 3 majors towards her Grand Champion title

JOY successfully completes 8 rally trials in two days handled by Karen. Joy now has 6/10 RAE runs completed and is currently ranked #2 Whippet and #2 hound in Canada in Rally Obedience as of June

FERGUS wins the breed and a group placement from the puppy class earning a few points toward his Canadian championship. He is major pointed in the US.

ACE wins another 5point major at the Celtic cluster (AWC Eastern) to finish his US title entirely owner handled by Paula Wilson.

FERGUS is Reserve Winners Dog to the major his first day at the Celtic Cluster AWC supported entry.
FERGUS places 3rd in the large 6 to 9 class at the AWC Eastern specialty under Donna Lynch

OKSANA has been awarded a CKC Top Lure Coursing Award ranking 9th in Canada in breed for 2017. This is quite an achievement considering she did it in 5 trials

Young Fergus has had some nice wins as a baby puppy, we look forward to some fun this year.

​Darcy wins Best of Breed at the Great Lakes Whippet Club specialty in a competitive entry at the Erie Shores weekend of hound specialties.

In May, Ace was WD every day in Lancaster Pa


​
2016 NEWS
​
*Just in time for Christmas, Joy earned her CD title at her first day of obedience trials and is now Vrymeer Christmas Joy CD RA RE CGN. Joy is our first whippet to attain the CD title, special thanks to our co-owner Karen who is now working on her CDX.


*Vrymeer It's In The Cards (ACE) wins Best of Opposite at the MAWA Specialty Sweepstakes in Atlanta under Judge Phoebe Booth (Shamasan Whippets) from the 6-9 month dog class in a large and very competitive sweepstakes entry.
​Ace is co-owned with Frederick and Paula Wilson. He was introduced to the fancy at the Southern by Paula and we are very proud of all their accomplishments in Atlanta.
*Ace's dam Darcy won the large and very deep quality BBE class at the supported entry on Friday under Judge Lorene Rooney-Flynn and placed in BBE at the Southern under Judge Raymond Yurick. We had a fun week with friends and enjoyed southern hospitality.
A very nice and well organized AWC regional specialty that was well worth the trip. 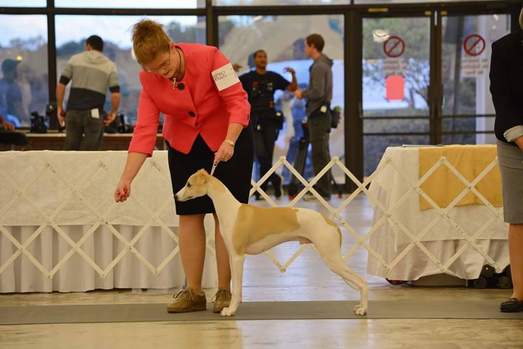 At her first day of trials Joy passed her rally advanced 3 for 3 and got high in class in trial 2 and high in trial with a perfect 100 score in trial 3. The next day Joy moved up to Rally Excellent and passed 3/3 for a rally excellent title.
​ She achieved two scores of 98/100 and another 100/100, that included 2 high in class out of 3

JOY is pictured below with all her ribbons from the weekend! 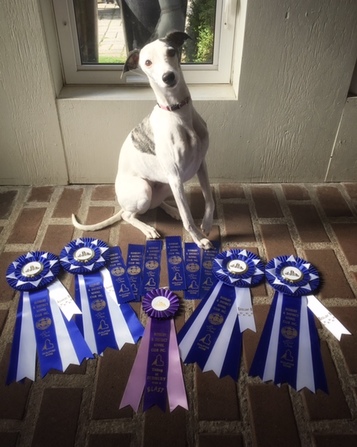 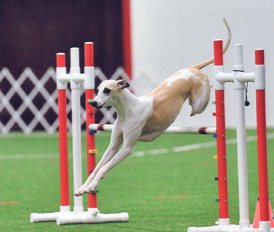 *Tira earned her Canadian Grand Championship at the end of September.
*In November Tira earned two legs towards her NAJ agility title in the USA handled by Judith Bannett
* A week later, Tira won a 40pt BOB on the field and she is now 2points shy of her AKC FCh title. Tira is Am GCh Can GCh Vrymeer Cartier Halo SC and resides in Maryland with the Bannett family 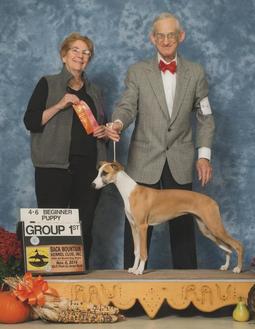 *Lucinda wins a very nice Puppy Group 1st in the USA with Stuart Bannett at her debut in beginner puppy class. ​Also known as "Vrymeer What Dreams May Come" Lucinda is one of our flashy red girls from our Mitchell X Cindy litter.
* Darcy wins a nice Group placement from the US classes handled by her buddy Calley Potts under Judge Nancy Bodine 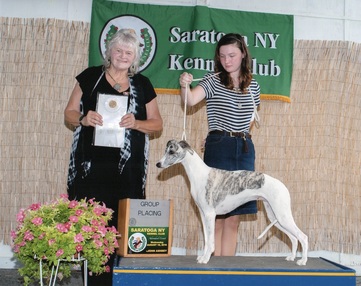 *Shown in the very competitive Bred by Exhibitor class, Darcy placed all 4 days at the American Whippet Club MidWest Specialty show weekend in Madison Ohio.We are pictured here after winning RWB at the supported entry on Sunday July 17th 2016.
So proud of our lovely girl, always in the ribbons.​ 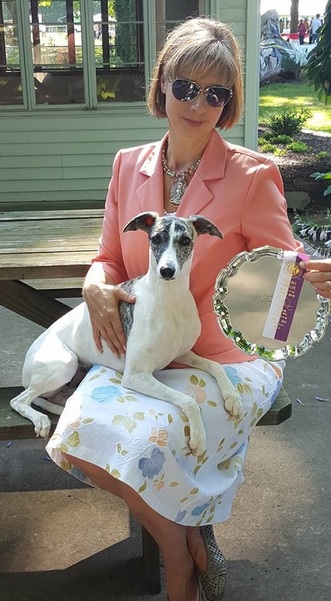 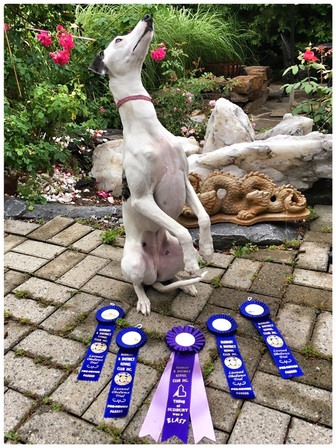 ​Puppies arrived the first week of June 2016, updates will be posted on our litter page

In March, Rusty earned his PCD title in Obedience and is now getting ready for his CD always handled by Anna

CKC just released the final Top Dog stats for 2015 and Darcy was a Top Dog ranked  #5 whippet in Canada! We are thrilled to make the top dog rankings (top five) considering how little she was shown last year.Thank you to the judges who have recognized the potential of our exciting little girl, we look forward to the future.

We did not breed in 2015 due to a variety of commitments however we have whippet litters planned in 2016 which will keep us rather busy here at Vrymeer.  Please see our litter page for details as they are announced. We generally have VERY limited availability, so if you are interested in a Vrymeer pup please contact us early in order to be screened for our waiting list. If you have any interest in a show or performance prospect please feel free to inquire on our future litter plans.

We already have some exciting news in 2016. We have recently been entrusted with the remaining frozen semen from Am Can Ch Cariad's Mr Bo Jangles SC. A very heartfelt thank you to Carol and Dave King for trusting us with your beloved Bo. We look forward to the future. Bo will remain in storage in CANADA as of August 2016. 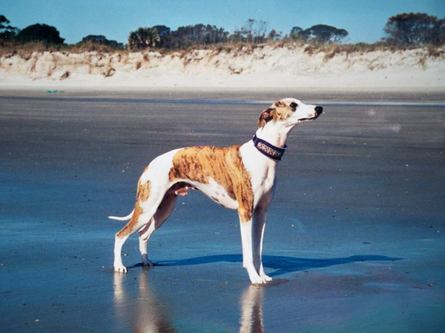 This beautiful oil in the style of the old masters was painted by world renowned artist Leisa Temple. The original is in private collection. Giclees are available from the artist's website. The artist was inspired to paint Bowie when she saw a photograph taken by Laurie Rusticus.
2015 NEWS 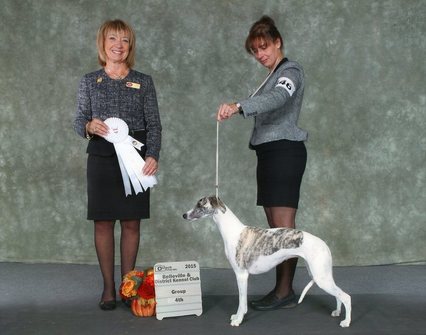 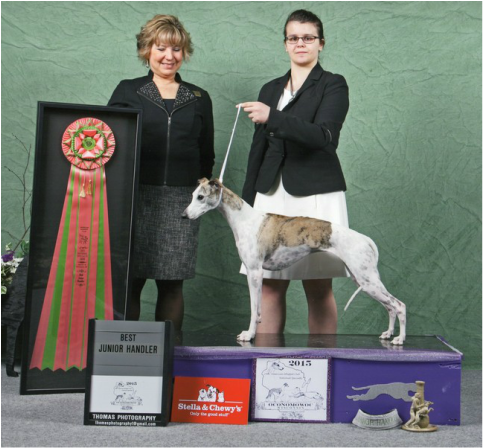 In April in Oconomowoc Wisconisin at the American Whippet Club National Specialty Danielle wins Best Junior Handler under Judge Jacquelyn Fogel. A very memorable win and a very proud moment for all of us. Danielle is pictured with Ch Caradawn Sophia her current JH whippet. 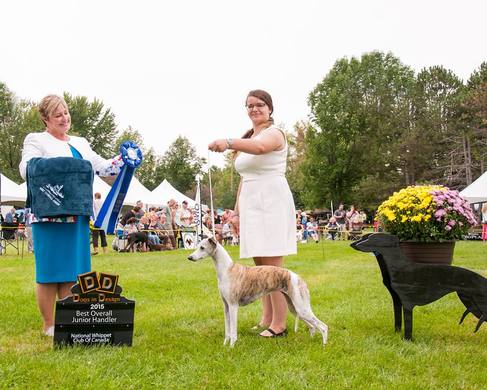